So far, my career has fitted neatly into decades. Having graduated from Brighton Polytechnic in 1990 as an Interior Designer, I set out to be the next Philippe Starck. The highlights from my first career included designing interiors for the likes of Jigsaw, Paperchase and even The Magic Circle. However, by the late 90s, I began to feel my future lay elsewhere. Photography had been an important hobby since my days at art college, and I was to eventually find a way of turning it into a career. I simply transferred my passion for interiors from the drawing board to the camera. Indeed, much of my early photography was recording my own design work.

The owners of The Spot, a venue in Covent Garden, had been clients for several years. I had designed and redesigned its bars around a number of different themes, from classic English pub to grand palazzo style bar complete with a copy of the Sistine Chapel ceiling. We later refurbished all the toilets, and a shot of the urinals made for a memorable business card. 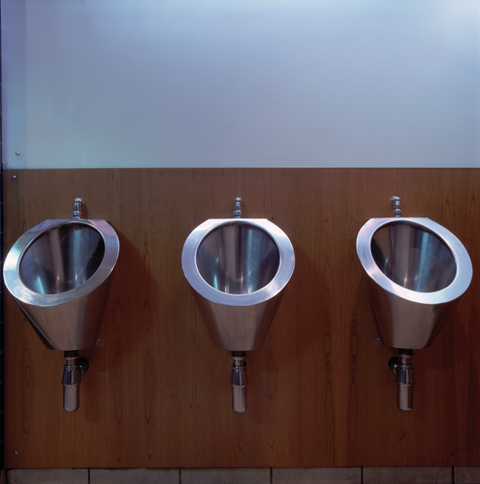 The next bar project was to be The Langley, also in Covent Garden. A cavernous subterranean space that had been a warehouse in the days of the fruit and veg market. I believe it is still drawing the crowds to this day. 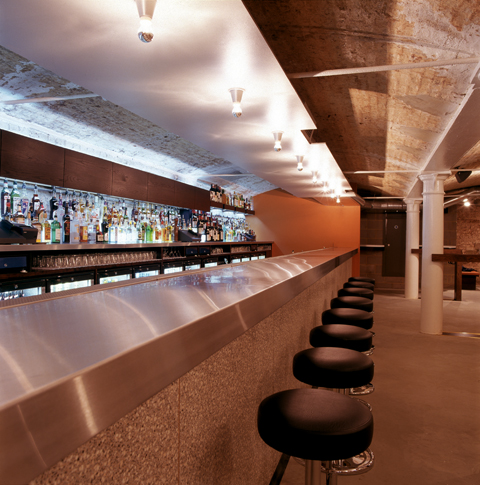 Away from bars, I also worked on several office fit-outs, including one for an Ad agency called Black Cat. An unusual client, who gave me plenty of creative freedom. The style could be likened to the set of Star Trek. The millennium was all about looking forward to a bright new future after all. 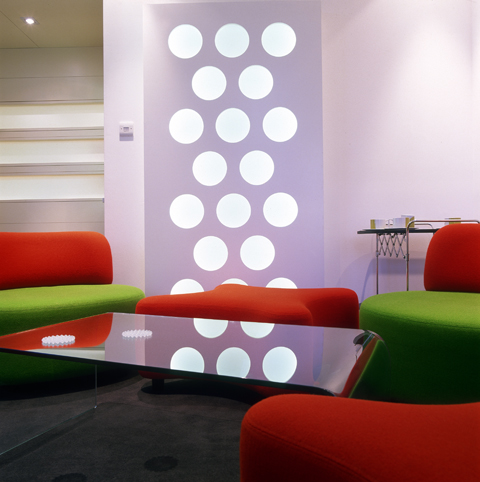 Some of my design clients went on to commission me as a Photographer, including Grahams Hi-Fi, suppliers and installers of sophisticated home entertainment systems. I designed a home cinema demo room at their Islington headquarters, and they later commissioned me to photograph some of their installations in the houses of wealthy Londoners. 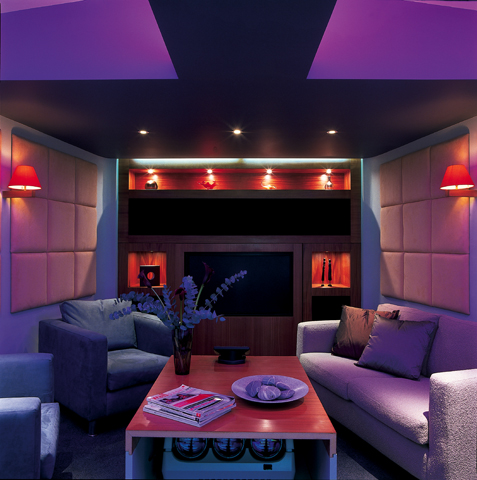 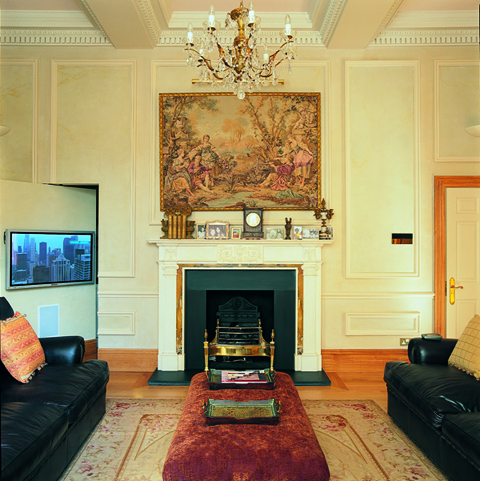 Around the same time, I embarked on some garden photography on behalf of my uncle, Michael Balston, for a book of his work entitled “Ten Landscapes”. My abiding memory is of traveling to exquisite parts of the english countryside, and then sitting in the car with the rain lashing the windscreen, waiting for those elusive sunny spells. 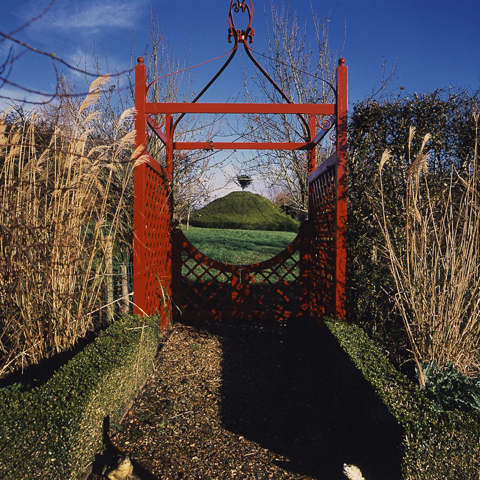 Late in 2001, shortly after giving up the “day job”, I received my first editorial commission from The Sunday Times, to shoot the lottery funded Millennium Wing and refurbished galleries of Tate Britain. 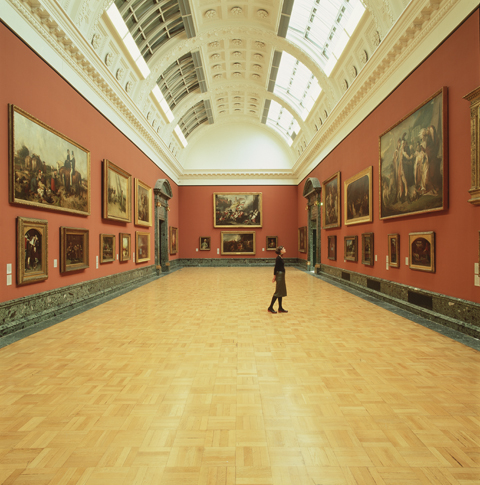 I was fortunate to embark on my photographic career at a time of such an exciting period in interiors and architecture, and especially in London. One of the commissions I was most thrilled by, was City Hall, for the now defunct Intra magazine. For me, being asked to photograph such an iconic new building, is like a portrait photographer shooting their favourite Hollywood star, and it certainly helped with establishing credibility early in my career to have such a well known building in my portfolio. 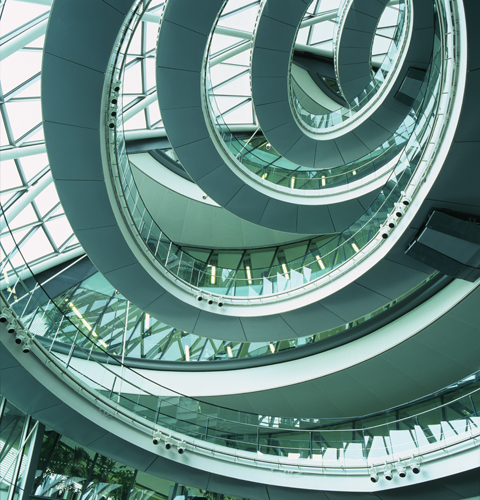 In May of that year, I visited Dubai for my sister’s 30th birthday. By chance, Conde Nast Traveller needed images of The Jumeirah Beach Club. The England football team were about to head out there for training prior to that year’s World Cup in Japan. Along with my assignment, I also managed to snatch some shots of another iconic building. 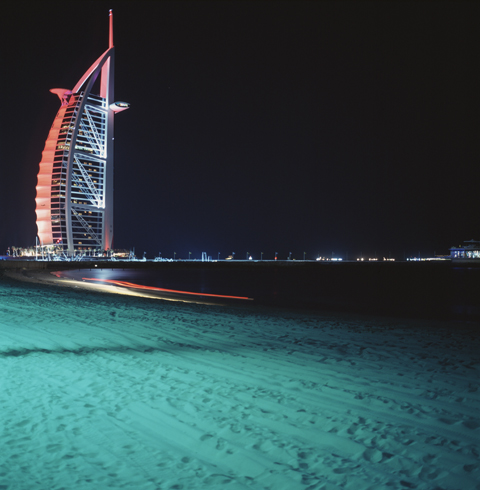 Meanwhile, back in London, with every day another bar and restaurant was opening, including Elysium, an exotic space beneath the Cafe Royal. 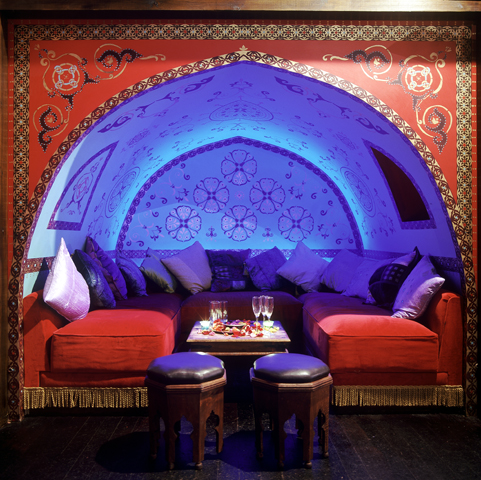 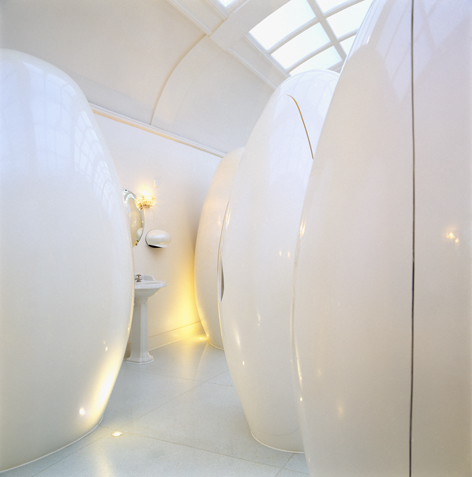 The new bars and restaurants just kept on coming. This year’s newcomers included Tantra, Jewel and The Mayfair Club, or the good, the bad and the ugly, in no particular order of course. 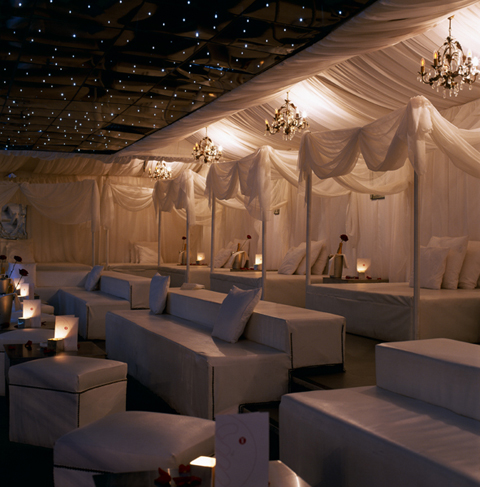 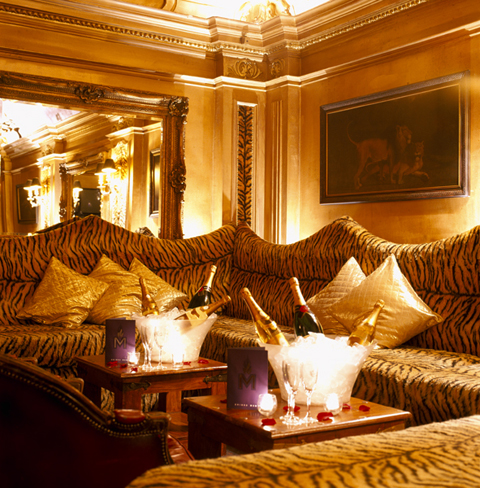 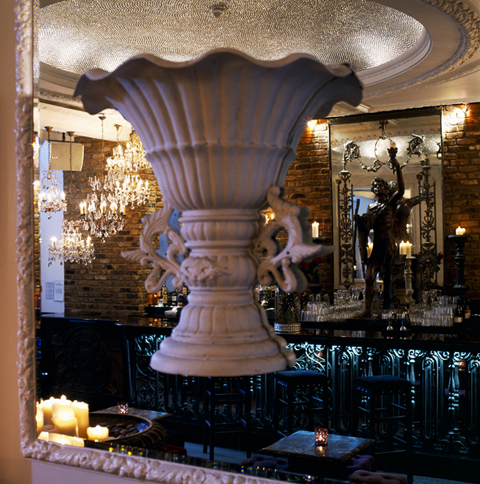 One of my regular editorial clients at the time was Caterer & Hotelkeeper magazine,  which boosted my portfolio no end with the high profile venues they were sending me to, such as Petrus at the Berkeley Hotel. Part of Gordon Ramsay’s stable, it had gained notoriety when a couple of bankers blew thousands on a single bottle of the restaurant’s eponymous wine, just after their company had cut swathes of staff from their payroll. 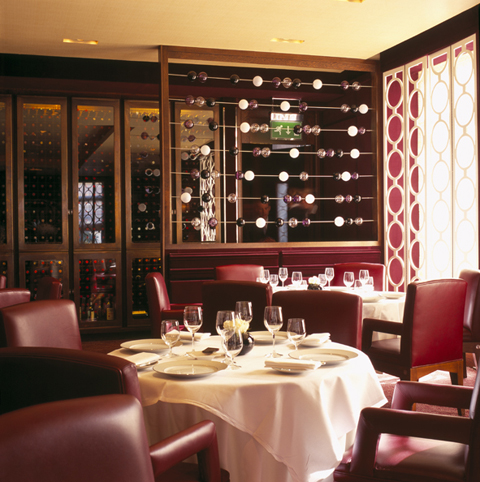 Throughout the decade, I have had numerous trips to Munich, the birthplace of my partner. It too, is rich in new design, and in 2003 I had the opportunity to shoot a wonderful development in the heart of the old city by Swiss Architects, Herzog de Meuron. Fuenf Hoefe,(or five courtyards in English) is a  series of linked public spaces in a mixed use scheme of retail and offices, enlivened with beautiful sculpture, water and hanging gardens. 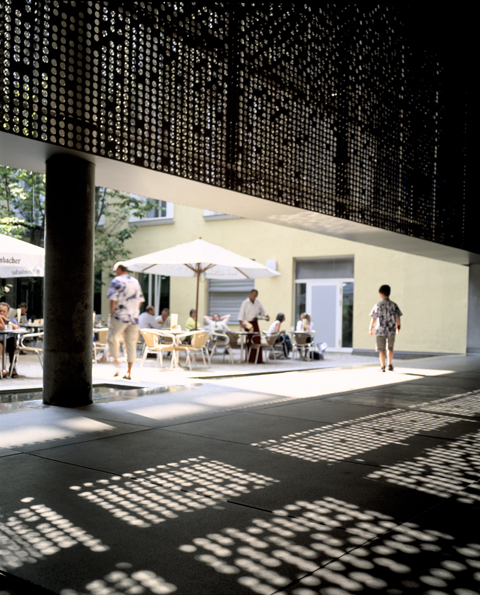 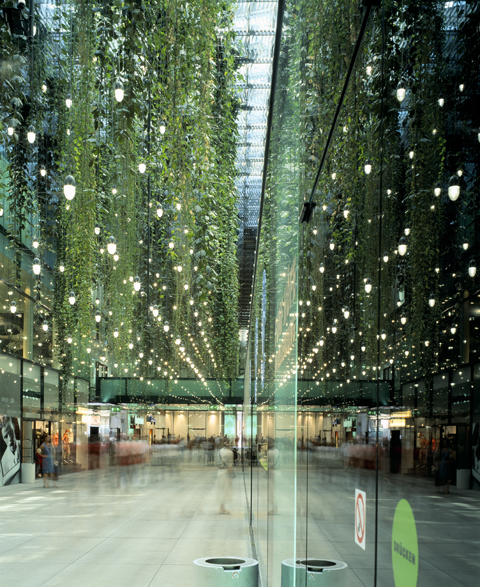 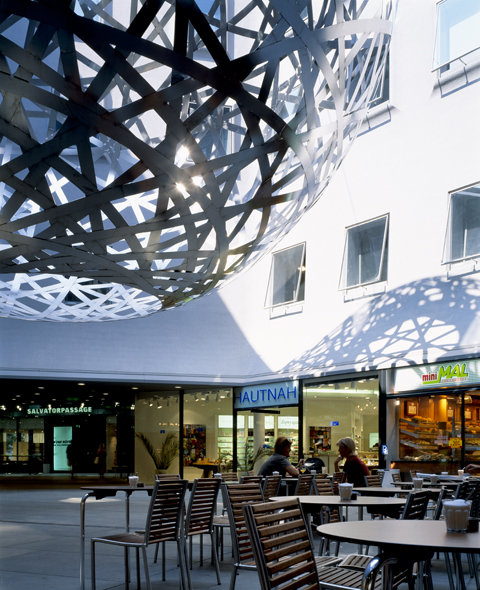 Not far from Munich’s centre, an underground line has been extended. One of the stations is a simple but stunning space adorned only with oversized light fittings by the extraordinary designer, Ingo Maurer. 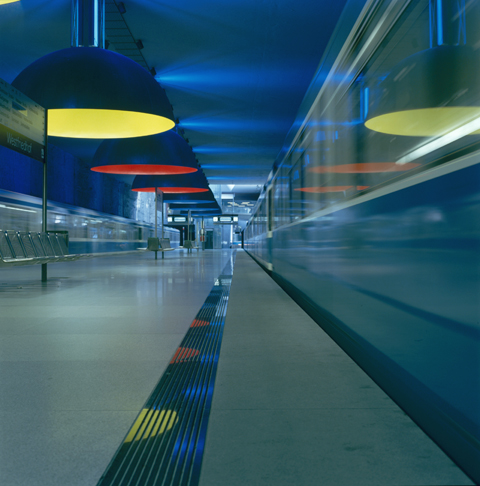 One would be forgiven for thinking that I only spent my time in bars and foreign locations, but increasingly I began shooting homes. Some for editorial, and some for portfolios of their architects or designers. One housing type, more than any other is associated with the age, namely, the loft. The following three examples may be miles apart stylistically, but are within walking distance of each other in the newly fashionable urban villages fringing London’s financial heart.

The first, in Clerkenwell was designed by Ken MacKay. On entering this loft, you pass between two translucent glass pods protruding into the living space, each a shower cubicle. Meanwhile the blood red kitchen can truly be described as the heart of the home. 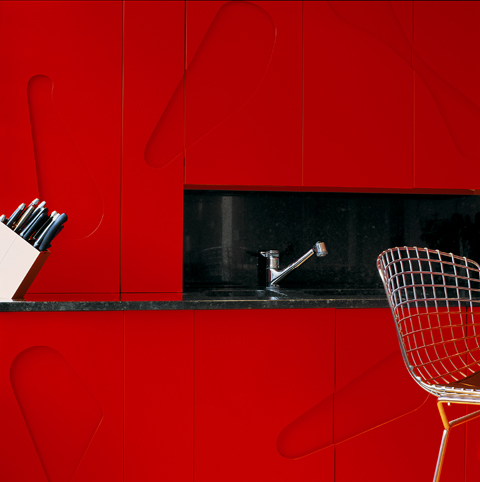 The second, a penthouse in Shoreditch, built for a chef, was designed by Zynk and as you would expect has an impressive kitchen, but its the bathroom that really impressed with its slick and curvaceous blue tiling. 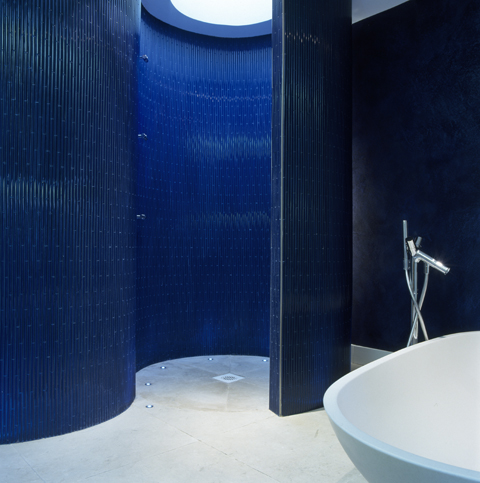 The third could easily be mistaken for a barn conversion, and feels much closer to what a loft was originally meant to be. Also in Shoreditch, it belonged to artist, Mark Adlington, and never had a designer or architect impose their will on it. Instead it’s a personal and creative assembly of its owners’ imagination. 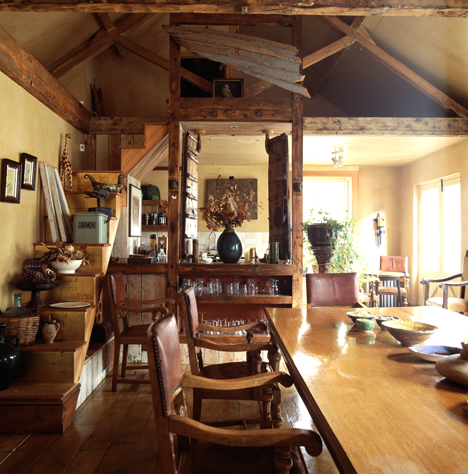 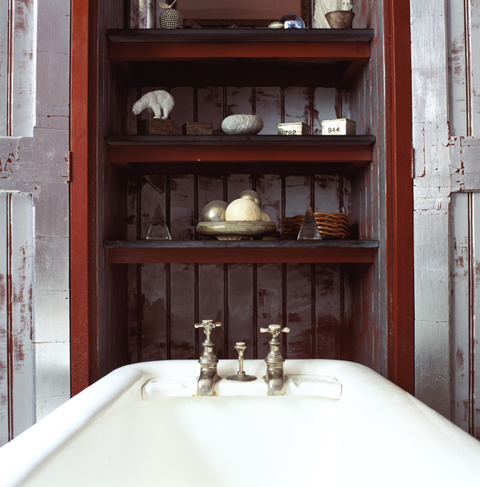